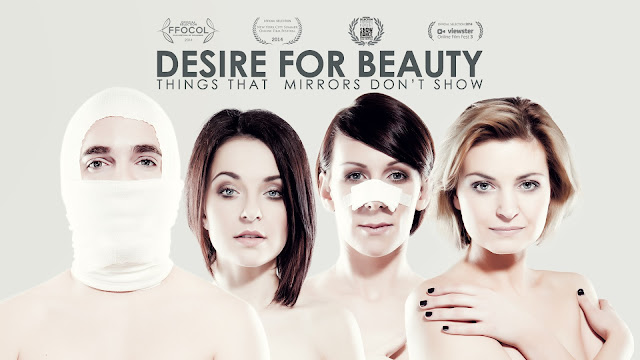 What is the meaning of beauty and what holds us back from seeing ourselves as beautiful? These are the central questions that drive Gaudêncio's film. The story follows four individuals who are about to undergo plastic surgeries in an attempt to make themselves aesthetically complete. While the four are all undergoing different procedures for varying degrees of vanity, they all share a sense of self-consciousness that has pushed them to a point where they don't see any other option, they MUST change the way they look.

Its hard to watch this film without passing judgement on the four subjects. But if you allow premature evaluations to stand in the way of listening, the humanity of our advocates could be lost on you. Yes the central characters of this film are in fact our advocates, a direct reflection of our obsession with perfection. We are given insight to the motivations of our protagonists through fairly effective reenactments and interviews. These scenes are juxtaposed with talking heads discussing the meaning of beauty and the currency it carries.

This is the first Polish documentary about self-perception and vanity. The film is decidedly beautiful to watch while it uncovers some ugly truths about us. Some of the questions raised by this film might feel obvious but sadly they are questions that need to be raised. Our image obsessed cultures rarely take the time to examine the internal. We know what we want and what what we like but can't be bothered to explore the reasons behind these desires.

Most of us (myself included) have preconceptions about people who go under the knife to find happiness and self worth. One of the interviewees postulates that "one day we will have plastic surgery in the equivalent of a photo booth" and goes on to say "at this point nobody will care about outer beauty because we can all look exactly how we want."

The film stars Agata Kulesza (Ida 2013) which won the Oscar for best foreign picture in 2014. Desire for Beauty is available on Hulu, Amazon Prime, Vimeo VOD and it's currently a staff pick on IndieReign.

Unknown said…
I didn't like all the unnecessary artsy scenes. They were distracting.
November 20, 2015 at 6:06 PM

FollowingFilms said…
Could you please elaborate on what you mean by "artsy"
November 20, 2015 at 6:10 PM

FollowingFilms said…
Film is a visual medium. Would you prefer it if they relayed all the information in an auditory format? Should they spell everything out with words? Should all films be comprised of nothing more than talking heads? In that case all films should be directed by Kevin Smith.
November 20, 2015 at 6:22 PM

Unknown said…
You would like that, wouldn't you?! And staring Rosario Dawson? Of course.