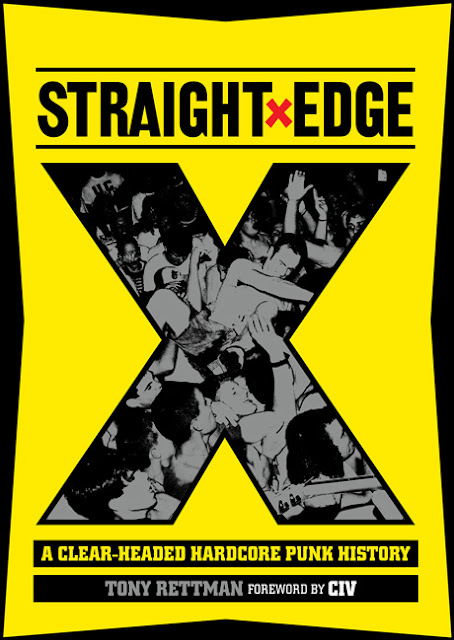 This deluxe softcover runs 400 pages, features a foreword by Civ of Gorilla Biscuits, includes a full-color insert, and after is available HERE. This is the latest authoritative and exhaustive leap by Bazillion Points into the vast demi-world of a powerful DIY subculture. Launch events were mobbed at the Sonos NYC store, Bridge 9 Records in Boston, and Hold Fast Records in Asbury Park, NJ, where Tony Rettman sat for a riveting Q&A with Minor Threat's Brian Baker.


Starting in 1981 via Minor Threat's revolutionary call to arms, the clean and positive straight edge hardcore punk movement took hold and prospered during the 1980s, earning a position as one of the most durable yet chronically misunderstood music subcultures. Straight edge created its own sound and visual style, went on to embrace vegetarianism, and later saw the rise of a violent militant fringe. As the "don't drink, don't smoke" message spread from Washington, D.C., to Boston, California, New York City, and, eventually, the world, adherents struggled to define the fundamental ideals and limits of what may be the ultimate youth movement.

Time Out New York calls the book: "a trip through the storied history of the straight edge punk movement, from its origins in 1981 as a call-to-arms from the band Minor Threat to its later flourishing as a fully-fledged counter-culture manifesto."