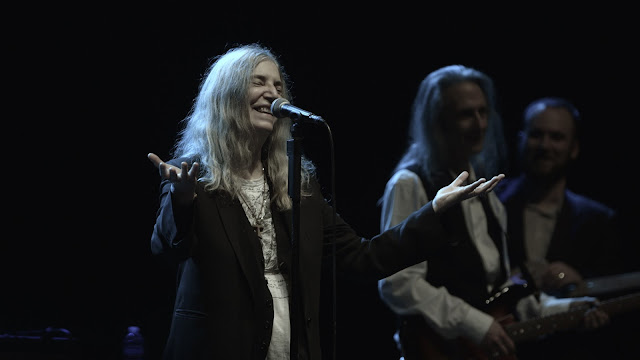 Tribeca has added the world premiere of Horses: Patti Smith and her Band, Steven Sebring’s documentary film capturing the final performance of Patti Smith’s iconic “Horses” at the Wiltern Theater in Los Angeles as well as the 40th anniversary of the Horses album tour. Following the special screening at the Beacon Theatre, Smith and her band will perform some of their most popular songs. Tickets go on sale on Monday April 2, at 12:00 PM.

TIME’S UP will host its inaugural New York event during the Tribeca Film Festival. The program will feature compelling conversations with activists, filmmakers, storytellers, lawyers and more including early TIME’S UP supporters such as Ashley Judd and Julianne Moore as well as Fatima Goss Graves (National Women’s Law Center), Robin Morgan (celebrated poet and activist), Mónica Ramírez (Alianza Nactional de Campesinas), and more. The day will explore how we got here, the women who came before us to make this work possible, and what’s next for TIME’S UP and beyond.

In addition, Tribeca Immersive is adding the world premiere of Jack: Part One. From the Emmy Award-winning creators of INVASIONS!, ASTEROIDS! and Rainbow Crow comes Baobab Studios’ latest visionary animation that lets viewers enter the world of Jack from the classic fairytale in a groundbreaking blend of VR and immersive theater that must be seen to be believed.

The Tribeca TV program expands with the world premiere of Enhanced, an ESPN docuseries from Executive Producers Alex Gibney and Brad Hebert, that explores the frontiers of sports training, technology and recovery, as boundary-pushing innovations propel human athletic achievement to its limits.

Tickets for TIME’S UP, Enhanced, and Jack: Part One are now available on tribecafilm.com.