D.O.A. Release New Studio Album FIGHT BACK on May 1st 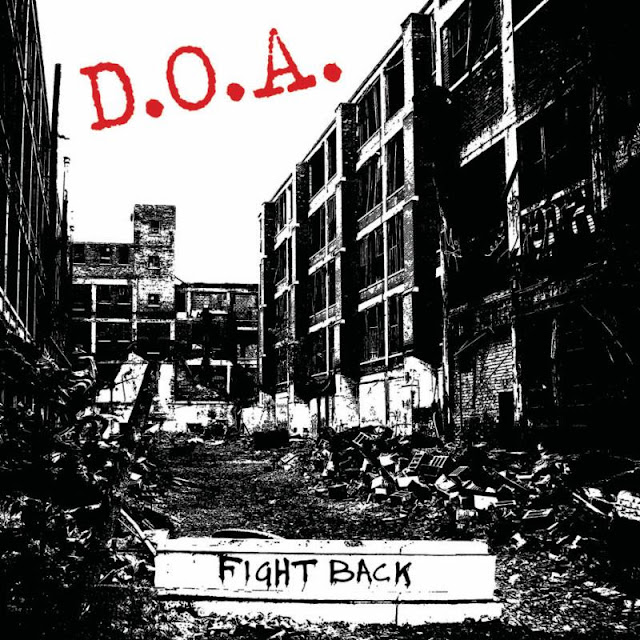 D.O.A., Canada's legendary pioneering punks who set the bar high for punk and basically invented hardcore, are ready to rip it up on the occasion of their 40th anniversary. They have a brand new album called Fight Back and they are embarking on a worldwide tour to support this impressive new effort. The "Men of Action" are ready to take on all opposition and lay down a punk rock path of wild music and free thought. Their rough and ready line up is led by the godfather of Hardcore, Joe Shithead Keithley (guitar, vocals) he is more than ably accompanied by the manic rhythm section of Paddy Duddy (drums) and Corkscrew (bass).


Early reviews indicate that Fight Back is the most innovative D.O.A. album since War on 45. D.O.A. has always been right on the pulse of what's going on in our screwed up world. Fight Back deals with what we have left, which in a lot of ways, is not much.

"When you really think about it, income inequality and disparity is at the root of a lot huge problems, like environmental degradation, war, sexism and hate" said Keithley who has been fighting the good fight for the last 40 years. It's why he's made TALK - ACTION = 0 his lifelong mantra.

Fight Back, released on Joe's own label Sudden Death Records, is a scathing and timely piece. Joe deals with all manner of unseemly low characters and issues. The album opens with acerbic "You Need an Ass Kickin' Right Now," next rips right into the startling "Killer Cops," then smashes into the anthemic "Time To Fight Back," which is street punk resistance at its fiercest. The album proceeds with the timely "Gonna Set You Straight" with violent and natural ease, and continues with the vitriolic "I Just Got Back From the USA." Then, the album takes a funny twist with "We Won't Drink This Piss" (down with bad corporate beer!) and "You Can't Stop Me," a song in which Joe delves into the character of Slapshot's playing coach Reggie Dunlop (a natural alter ego perhaps).
D.O.A. was formed amidst a whirlwind of controversy and upheaval. In 1978, three guys fresh out of high school from the backwaters of Canada's suburbs heard about the punk rock revolution. In February of that same year the band formed and started playing shows. They soon realized that there were no record deals coming in any time soon.

Keithley (aka Joey Shithead) who was working towards being a civil rights lawyer before he found punk rock, concluded that the band had to take the "do it yourself" approach long before DIY became a popular concept. He formed a fledging record label called Sudden Death Recordsand the label released D.O.A.'s first snarling slab of vinyl, the Disco Sucks 7" EP.

Disco Sucks soon became an underground hit and the band started touring from Vancouver to their newly adopted "home base" of California five to six times a year. In 1980, Keithley coined the term "hardcore" and the band soon released their landmark album Hardcore 81. The album became a hit, the hardcore movement took off, and D.O.A. pushed that expression into common vernacular.

Over the last four decades, D.O.A. have released 17 studio albums, sold over a million albums, and played 4,000 shows on five different continents. The band's albums, shows, and attitude have won over three generations of fans and influenced the likes of Green Day, Nirvana, Offspring, Henry Rollins, David Grohl and The Red Hot Chilli peppers, to name a few. Keithley has also written two books: I Shithead: A Life in Punk and TALK - ACTION = 0.

From day one, D.O.A. has helped organize and lead hundreds of benefit concerts and protests for good and just causes like environmental issues, women's rights, food bank benefits, and First Nations' rights. They have organized protests and stood against war, racism, weapons proliferation, and countless other causes.

Keithley has been called a cultural politician, trying to change the world from outside the system. He's currently running for Mayor of his home town of Burnaby, under the Green Party banner, attempting to change the system from inside. Keithley and the band were also ardent supporters of the Occupy Movement, realizing this was a step towards equality in our world. He is always looking for a way to push "grassroots democracy" and like his idol Pete Seeger, he and the band won't give up.
When the band takes their wild, unbridled show live show on the road, it's a must see, because it's a chance to see one of the last real punk rock bands that gets out there, kicks ass, and tells it like it is. It's a perpetual atmosphere of chaos, veering out of control, but somehow, at the last minute, D.O.A. manages to reign all of it back in. And in an indescribable way, you are not quite the same person afterwards.