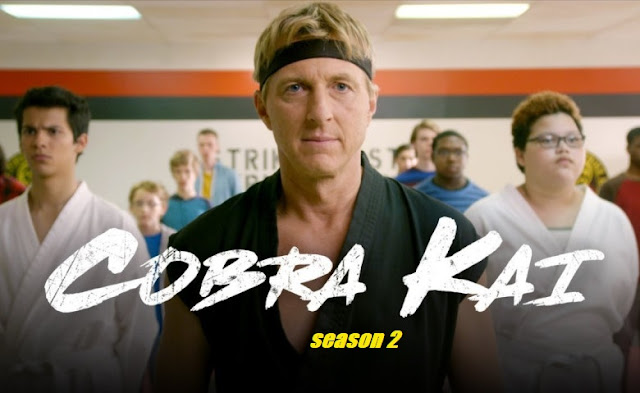 YouTube announced that it has ordered a second season of the wildly-popular and critically-acclaimed hit series COBRA KAI from Sony Pictures Television and Overbrook Entertainment. Since its debut on May 4, the first episode of COBRA KAI has generated over 20 million views. Series stars Ralph Macchio and William Zabka are set to return for a second season. The 10-episode, half-hour series will begin production this fall and debut on YouTube Red in 2019.

In COBRA KAI, Ralph Macchio and William Zabka revisit their star-making roles from the iconic film franchise, The Karate Kid. The epic adversaries return to the dojo, thirty years after the events of the 1984 All Valley Karate Tournament. A down-and-out Johnny Lawrence (Zabka) seeks redemption by reopening the infamous Cobra Kai karate dojo, reigniting his rivalry with a now successful Daniel LaRusso (Macchio), who has been struggling to maintain balance in his life without the guidance of his mentor, Mr. Miyagi. The cast of series regulars, all returning for a second season, include Xolo Mariduena as “Miguel Diaz” Tanner Buchanan as “Robby Keene,” Mary Mouser as“Samantha LaRusso” and Courtney Henggeler as “Amanda LaRusso.”

COBRA KAI is written and executive produced by Josh Heald, Jon Hurwitz, and Hayden Schlossberg. Heald is the writer behind the cult classic Hot Tub Time Machine franchise, while Hurwitz & Schlossberg created the successful Harold & Kumar film series, and wrote and directed the global hit American Reunion. Most recently, Hurwitz & Schlossberg produced the critically-lauded film Blockers for Universal Pictures. Together, Heald, Hurwitz, and Schlossberg conceived of this new Karate Kid storyline that picks-up decades after the original film ends. The showrunning trio directed much of season one and will do the same in season two. James Lassiter and Caleeb Pinkett will again executive produce for Overbrook Entertainment in association with Sony Pictures Television Studios.

“This series had all of the right elements from the very beginning -- compelling characters, a storied rivalry, and the talented original stars,” said Susanne Daniels, Global Head of Original Content, YouTube. “The way viewers have embraced the new twist on this beloved franchise has been nothing short of amazing, and we’re thrilled to partner with Sony TV, Overbrook and the extraordinary creative team led by Josh Heald, Jon Hurwitz, and Hayden Schlossberg to create a second season.”

“We are so elated with the performance of Cobra Kai and our incredible partnerships with Josh, Jon, Hayden and Overbrook and of course, You Tube Red. This has been a remarkable experience and the audience reaction only further validates what we already knew – that this team and series is exceptional and incredibly special,’ said Jeff Frost, President Sony Pictures Television.

“Continuing the Karate Kid saga with YouTube Red has been a dream come true," said Heald, Hurwitz, and Schlossberg. "We are grateful to all our creative partners for giving us the freedom to revisit and expand the LaRusso/Lawrence rivalry. And we are truly exhilarated by the tidal wave of support from fans of this story, both old and new.”

With over $619 million at the worldwide box office, The Karate Kid franchise has entertained millions of fans for over 3 generations. For years, YouTube fans from around the world have also kept the legend of the films alive through uploads of clips, tributes and related content, amassing over 1 billion views to date.