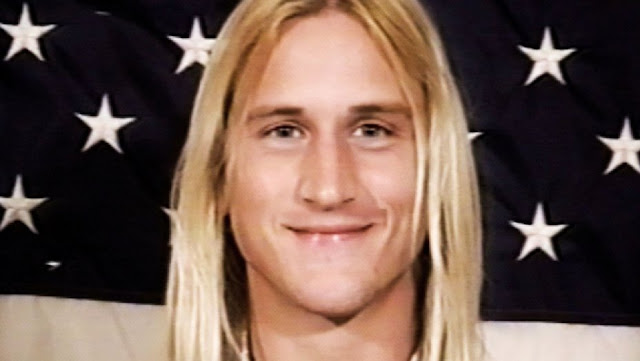 Mike Diana is an outsider artist working in comic books. Unlike what most would associate with the medium, Diana uses his funny books to tackle subjects like the environment, consumerism, and pedophilia. Through graphic depictions and dry social commentary Diana pushes the boundaries of acceptable speech and taste so much so he has the distinction of being the first person to be convicted of artistic obscenity.

BOILED ANGELS: THE TRIAL OF MIKE DIANA opens with the following: "The uncensored art shown in this film is deliberately and aggressively NON PC. It is meant to provoke, disturb, shock, offend, and confront the viewer. If graphic depictions of sex and violence disturb you, STOP watching the film NOW." It's the perfect way to open the film as it contains imagery that will make many viewers uncomfortable. And if you are unable to get past that imagery to see the tragedy of Diana's story, the film has no interest in speaking to you. The film mirrors its subject’s art in many ways while managing to remain true to the spirit of the artist himself. After hearing Diana speak for a few moments, it's clear that he is a kind man who uses satire to express his concerns about the world around him.

Being raised in a Catholic home with constant exposure to; images of the crucifixion, sermons about burning in hell, and the denouncing of popular music had a profound impact on Diana. The pious nature of the parishioners seemed to contradict the scandals that surrounded the church. No one talked about hypocrisy or questioned the Holy Father’s message, they simply tossed their tidings in the collection plate and judged all the non-believers. It was during high school that Diana began experimenting with different forms of creative expression and eventually landed on illustration as his preferred medium.

After a few years of self-publishing his comic BOILED ANGELS, a California cop came across one of Diana's books. The officer decided the imagery bore a resemblance to the Gainesville student murders that were at that point unsolved. He then informed the FBI of his findings and Diana became a murder suspect. Once Diana was cleared of the murder charges the local police decided to move forward with obscenity charges. As the film points out the only action Diana took was moving a pen across a blank sheet of paper and that was enough for the Florida DA.

While BOILED ANGELS is squarely set in mid-90's Florida its story couldn't be more relevant, it is without question dealing with what we as a society are going through right now. How you feel about this film could be largely influenced by how you feel about speech. We live in an era of trigger warnings and silencing. I personally have come to believe that I in no way have the right to pass through life unoffended. In fact, I will stand up for the rights of the most disgusting, personally offensive, seemingly indefensible ideas to ensure that the right to self-expression will never be diminished. No matter how you align yourself politically, the rights of an NFL player to take a knee and those of a white supremacist in Charlottesville, are (and SHOULD) be equally protected. Your speech and right to self-expression are in no way more precious than anyone else's.

BOILED ANGELS: THE TRIAL OF MIKE DIANA is the most important film screening at this year's Fantasia Film Festival. Visually striking and frustratingly salient BOILED ANGELS is a rare documentary that remembered to entertain while educating without ever preaching.