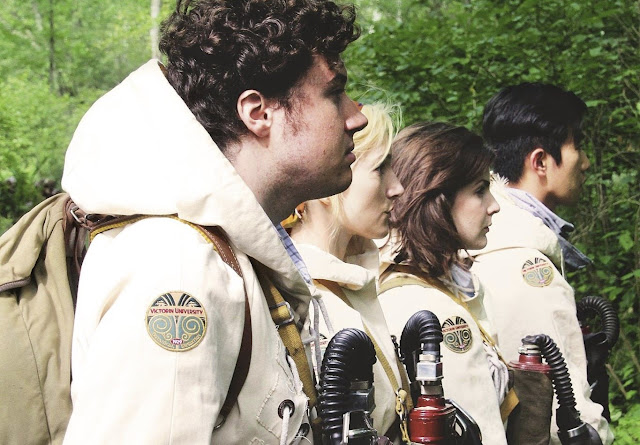 The 1920s are often referred to as the "roaring 20s." A time when the automobile boom had started to kick in, radio was the most popular form of mass media and telephones began to connect millions of homes. This was a good time for (white, heterosexual, male) Americans that didn't mind going to a speakeasy for a cocktail. For minorities and women? Not so much. Women were granted the right to vote in 1920 and Jim Crow laws were looming in the not too distant future.

FLORA is set somewhere in a North American forest during the summer of 1929. A group of students has been sent out to examine and catalog the native plant life of a remote wooded location. Where the junior botanists uncover a deadly mold that kills almost everything it comes in contact with.

While not overtly political, Sasha Louis Vukovic uses FLORAs time period as a salient metaphor for our current state. The plot could remind some viewers of THE HAPPENING but the environment as the big bad is the only connective tissue. FLORA shares more of its DNA with APOCALYPTO or THE NEW WORLD, both beautifully photographed films where the tension is completely character driven.

Having mold filled dust as a villain is a difficult thing to pull off. You can't rely on jump scares or special effects to sell the terror, it's all lying on the shoulders of your cast. They are asked to sell the wind as a bad guy, and that's no easy task. Vukovic has cast FLORA  with actors who are not only up to that undertaking but far more. Not only do they sell a biological baddie, they create characters who would be compelling outside of their heightened narrative.

Using lush scenery, gorgeous widescreen photography, and an incredible score, Vukovic makes a film that transcends any budget limitations it may have had. This is the reason I love smaller independent films. Its innovative from every technical aspect and carry's more visceral weight than most films I've seen this year.

Full disclosure, I took a break from watching primary results last night to watch FLORA. That without a doubt had an impact on my viewing experience. We might pat ourselves on the back for how far we've come. For how progressive we are. But if current political rhetoric has shown us anything, it's that a great number of Americans want to slide back to a time they romanticize, simply because they had it better. FLORA has the right amount of insight to give it depth but never comes across as preachy. The best genre films are ones with something say. The ones that use terror as a way to sneak in subversive ideas. FLORA, its one of the good ones.

FLORA can be found on Amazon, Best Buy, and you can stream it at watch.millcreekent.com