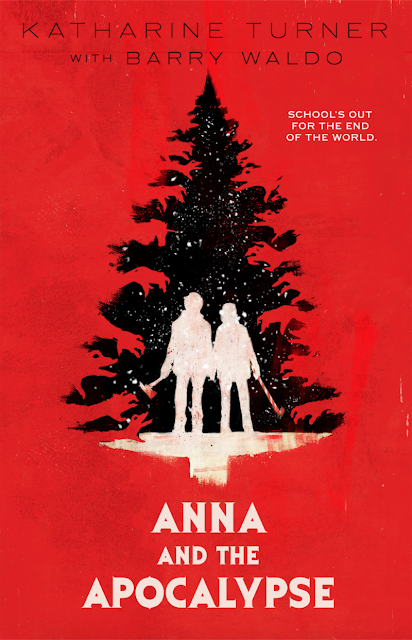 In what is one of the more unexpected stories of the day it appears the FANTASTIC FEST hit of 2017, ANNA AND THE APOCALYPSE, has been adapted to a novel. It's not often we get a horror musical comedy that resonates with audiences and it's even rarer to see a film like this adapted to a book. I'm on board for any chance to spend more time in this delightful world in any form. Check out the press release below.

ANNA AND THE APOCALYPSE, Orion Pictures’ feature film musical winning over audiences at film festivals worldwide with its humor, horror and musical dance numbers, is heading to select theaters November 30 with a national rollout to follow. Ahead of the film’s theatrical release, Anna and the Apocalypse is set to arrive in bookstores as an all-new horror comedy novel from co-authors Katherine Turner and Barry Waldo.

ANNA AND THE APOCALYPSE promises an extended look at Anna and her friends as they navigate the teen angst-filled halls of high school and wage an all-out war against a zombie invasion, expanding on the creative vision of Anna and the Apocalypse creator, the late Ryan McHenry and director John McPhail.

“ANNA AND THE APOCALYPSE is a wonderfully realized world, full of strong characters, epic friendships and gripping adventure,” said the novel’s co-authors Katherine Turner and Barry Waldo. “The book gave us the chance to delve deeper into relatable, kick-ass characters and really dig into their lives and relationships. The Anna universe is so full of heart and so much fun to explore, it was just a gift to us as writers. It’s definitely the best zombie high school Christmas horror comedy book we’ve ever written!’

The ANNA AND THE APOCALYPSE book, based on the original screenplay by Alan McDonald and Ryan McHenry, is available for pre-order now at major online book retailers and
https://us.macmillan.com/books/9781250318800 and will be released on October 23, 2018.