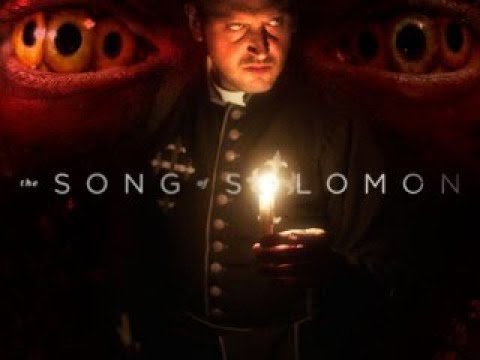 Exorcism films do not begin and end with William Friedkin's THE EXORCIST. With entries as varied as BEETLEJUICE, CONSTANTINE, and THE RITE, the exorcism sub-genre of horror films is far more diverse than many immediately recognize.

With THE SONG OF SOLOMON director Stephen Brio has added a unique take on the possession movie. In his film, the Catholic church attempts to save the soul of Mary (Jessica Cameron) who appears to have been possessed after witnessing her father's brutal suicide.

Mary is off camera while her father takes his own life. In a scene that could play as a confessional or an accusation, the family's patriarch lists off the reasons why he is being forced to use his knife on Mary and himself. He details how they were a good, loving family and he can't understand why she is accusing him of abuse. Using demonic control as a metaphor for trauma survival is something so natural, I can't believe it's not woven into every film of this kind.

Jessica Cameron (TRUTH OR DARE, MANIA) gives a career-best performance as Mary. She seamlessly vacillates between multiple characters, personalities, or demons, depending on how you want to interpret the film. While filled with enough gore to satisfy the most blood-thirsty viewer, the real terror in THE SONG SOLOMON comes from Cameron's performance. She manages to inject a sense of humanity into every scene no matter how batshit crazy it may be.

I want to emphasize that this film is not for the faint of heart. My wife didn't make it past the opening sequence. Over-the-top violence and gore have never been a problem for me when it feels like an organic extension of the film. With that being said, the savagery of THE SONG OF SOLOMON will be too much for most viewers.

Grotesque imagery aside, Brio frequently heads down familiar paths but never stays on them for very long. He seems hell bent on putting his own stamp on the genre. Films as cruel as THE SONG OF SOLOMON rarely have anything more to say beyond their body count. But Brio uses barbarity as a way to explore some nuanced and subtle ideas. A jarring juxtaposition that demands to be revisited.

THE SONG OF SOLOMON is currently available on DVD, Blu-ray, and VOD.