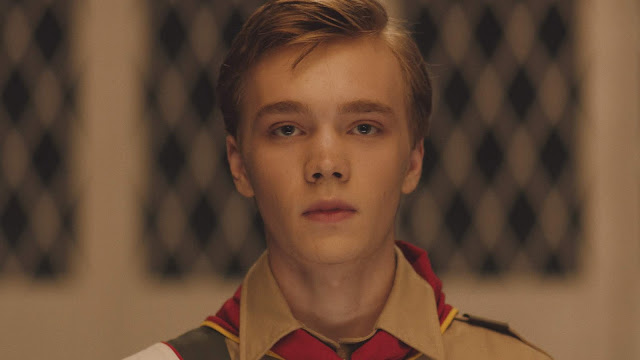 It can be painfully difficult to recognize the faults of our parents. They love, support, and provide for you. They are the center of our worlds for a large portion of our adolescence. Many of us are unable to fully appreciate how screwed up our childhoods were until we enter adulthood. For Tyler, (Carlie Plummer) that possibility becomes apparent far sooner.


Tyler is about as all American as they come. A level-headed young man raised in a small working-class community. He's a Boy Scout and attends church every Sunday. When he accidentally uncovers his fathers (Dylan McDermott) cache of sadistic pornography he becomes suspicious that he could be the son of Clovehitch, a local serial killer who was never apprehended.

Director Duncan Skiles never takes the expected route with any of the somewhat familiar ground he covers in THE CLOVEHITCH KILLER. Kassi (Madisen Beaty), the town weirdo who helps Tyler uncover the truth about his father, is a perfect example. In most films, she would be the dreamy goth girl who only exists to further the plot, but Skiles allows Beaty to flesh out a real character with her own motivation and agency. She is an outcast due to her personal experience and trauma, not just an extension of the protagonist's sexual fantasy.

Similarly, the film changes perspective towards the end of the second act and has one of the more disturbing torture scenes in recent memory. It's not violence or gratuitous gore that Skiles enlists to unnerve the audience, instead, he uses patience. He lingers on moments to the point they are almost unbearable in their realism. Some of the details seem to be inspired by real-life events and we are given a grounded look at a mass murderer. Nothing in CLOVEHITCH feels exploitative or sensational, every moment exists to further the narrative. In fact, the film is more about the mysteries that exist in all of our upbringings than an exploration of what causes one to kill.

IFC Midnight will release the thriller, THE CLOVEHITCH KILLER in theaters and available on VOD and Digital HD on November 16, 2018.