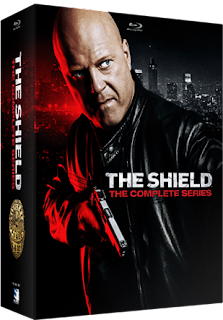 The 18 disc Blu-ray set Mill Creek has released for THE SHIELD marks their finest work to date. Everything from the quality of packaging to the number of extras makes this set a must own for any fan of the controversial series.

THE SHIELD follows Detective Vic Mackey (Michael Chiklis - GOTHAM, FANTASTIC 4) and his corrupt cohorts who are tasked with ridding Los Angeles of its most violent criminals using any methods they deem necessary. From the first episode on, this crime drama was constantly calling into question its anti-heroes methods and taking an uncomfortable look at our criminal justice system. By creating complex characters on both sides of the law, show creator Shawn Ryan (S.W.A.T., TIMELESS, THE UNIT) dissolved the thin blue line over the course of his series 7 seasons.

Full 4k HD restorations of each episode, along with dozens of hours of special features including deleted scenes, commentaries from the cast and crew, and tons of featurettes made it impossible for me to dive into all the features and episodes and still publish this review on time. In fact, I plan on regularly revisiting this set just to see how much is in there. I assume that with the 88 episodes and special features its pushing 150 hrs of content. That would take even the most die-hard fan weeks if not months to scour through.

The show itself holds up remarkably well, despite some regrettable fashion choices and awkward needle drops (I'm looking at you Bawitdaba by Kid Rock). THE SHIELD is as salient today as it was 15 years ago. Shawn Ryan was reacting to a cultural groundswell that few other showrunners were daring enough to take on. In light of the Black Lives Matter movement and the real-life tragedies that inspired it, THE SHIELD can be viewed as a fictional work that predicted our current social state.

THE SHEILD Complete Series Blu-ray boxset can be purchased from Mill Creek HERE and from Amazon HERE.