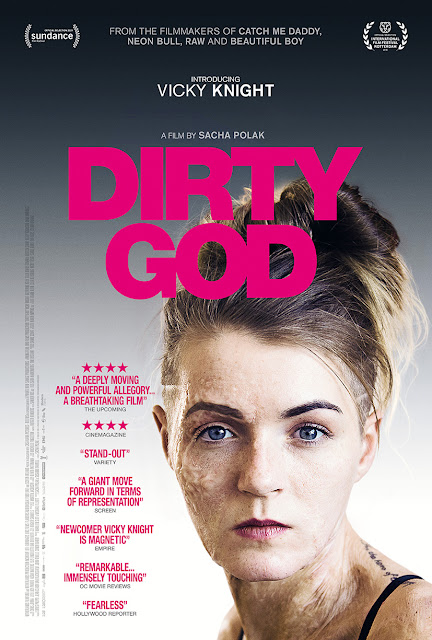 Sometimes when I'm presented with the synopsis for a film I can't help but pull for it. An idea that, on its surface, so deeply resonates with me I want to immediately champion it. When I read the description of Sacha Polak's DIRTY GOD I knew I'd be completely on board as long as it wasn't an unmitigated cluster fuck.

To fully explain, I'll give you a brief description of the film and explain why this story offered the potential for such a personal connection. The film is about a young mother trying to find her way after being the victim of an acid attack by her ex-boyfriend. Polak cast a first-time actress who was in a house fire as a child that left her with scars on about 30% of her body.

That should be enough for anyone to want this film to succeed. Acting is a vulnerable business that's accompanied by cruel and often thoughtless criticism. On the personal side, I spent close to 8 weeks in a Phoenix burn unit 11 years ago. My wife was 3 months pregnant at the time and while there were wonderful things that happened that year it was an incredibly difficult time.

The opening sequence of the film is composed of close-up shots of multiple burns. From this moment alone I knew I was in good hands. It was like looking at my own body. The scaring that I see every time I look at my watch, take off my socks and shoes, or shower was being represented on screen, I was almost moved to tears. I'm a straight, white, male with a good middle-class job, I am represented as fuck, but this was a first. I had never seen this side of myself in a film.

While I don't spend much time thinking about the accident that caused my injuries anymore, I am aware of them every day.  The way I can't quite bar an F chord anymore (the open shapes seem to require a bit less dexterity) or that certain types of underwear will chafe my thighs, my injuries inform every day of my existence.

Jade (Vicky Knight) is surrounded by reminders of her appearance, I assume this is the case for most women in western society, but for her, that awareness is amplified 10 fold. She finds a moment of peace when she dawns a hijab, freely dances, and finds the confidence to touch a man in her apartment complex. For most outsiders, the veil worn by Muslim women is seen as a symbol of oppression, but in DIRTY GOD it is used for liberation. It's an interesting juxtaposition that both serves the narrative of the film and makes a subtle but potent statement about our culture and our perception of outsiders. For me, this brief moment beautifully encapsulates the entire film.

Our protagonist's infant daughter cries when Jade picks her up. At first, it appears this could be a reaction to her scars but a scene later in the film makes it clear this reaction is due to lack of exposure. Jade is a fairly self-obsessed 20 something, single mom, who doesn't spend a ton of time with her daughter.  One of the brilliant things about this film is how three dimensional Jade is allowed to be. She is a victim but in no way flawless. The film never paints her as culpable but it does show her as a fully realized character. We are given reasons to dislike her while empathizing.

When Jade turns to online sex chat for comfort we know it will only create more isolation.  She is careless with her internet browsing at work and imbued with a heartbreaking level of innocence. An impetuous child awkwardly traversing the path to adulthood.

Vicky Knight gives not only one of the strongest debut performances in years, but it is also without a doubt the finest performance I've seen this year. I cannot recommend this film highly enough. It's not always an easy film to watch, not because of what it has to say about our main character but largely because of what it says about the rest of us.