GIANT FROM THE UNKNOWN Blu-ray Review 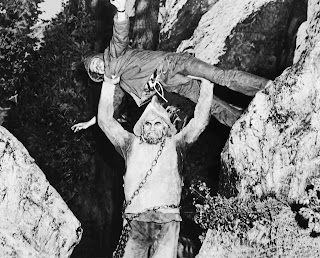 The picture above, says it all. If you see that image and want to know more, you should check out Richard E. Chuna's 1958 backyard horror schlockfest GIANT FROM THE UNKNOWN.  From a first-time director, writer, and producer the film has an infectious energy that's only possible from a group of people who have no idea what they are doing. If you imagine a film somewhere in between Ed Wood and Roger Corman you won't be far off.

Dr. Frederick Cleveland (Morris Ankrum) and his daughter Janet (Sally Fraser) are joined by scientific researcher Wayne Brooks (Ed Kemmer) in the pursuit of ancient artifacts from Vargas, a giant 500-year-old Spanish conquistador, you know that old chestnut. When a lightning storm interrupts their search, the team finds much more than artifacts when the long-lost Vargas returns to life, with a murderous rage and an ax to grind!

While amateurish and at times overtly racist at others the film is not without its merits. Shooting the film on location in Big Bear with 16 mm black and white gives an ominous tone often missing from other ventures of its ilk. The cast of supporting players is made up of crew members and locals who are so out of their element it's hard not to love them. With the exception of the white guy who plays a Native American. Leaning into every stereotype short of a rain dance this is one distracting and difficult element to overlook.

Giant from the Unknown has been resurrected from the original camera negative with a stunning 4K transfer and presented in widescreen for the first time since its initial release in 1958. You can tell the filmmakers were prepared for an eventual televised release because the vast majority of the action is in the center of the frame. This release includes exclusive special features: Never-before-seen interviews with author C. Courtney Joyner and actor Gary Crutcher and commentary from historian Tom Weaver, directed by Daniel Griffith at Ballyhoo Motion Pictures.

Inspired by the film, the Limited-Edition Giant Cult Film Box Set features exclusive collectibles that will thrill any cult classic film fan, including a 13-month cult film calendar, bookmark, magnet, custom playing card deck and lapel pin inspired by Vargas the Giant himself. And that’s not all!  Each box set will also include a surprise, TFD Vault cult film, recently restored from the original camera negative in stunning 4K and a one-year subscription to The Film Detective app, unlocking thousands of classic film and television titles available on iOS, Android, Roku, Apple TV and Amazon Fire TV.

At an $120+ value, the Limited-Edition Giant Cult Film Box Set is the perfect holiday treat. And if this giant offer at giant savings wasn’t incentive enough, the first 100 Blu-ray box set orders will receive their copy of Giant from the Unknown in a special blood-red Blu-ray case.