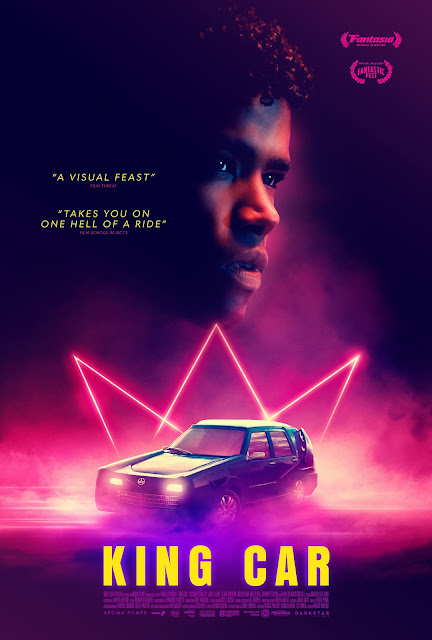 Today I'm joined by Renata Pinheiro & Sergio Oliveira to discuss their film KING CAR
Renata Pinheiro is a Brazilian film director and visual artist. Graduated in visual arts at UFPE, she was a resident artist at John Moore University, UK; and studied at INA, (Institut National de L’audivisuel). She’s known for her ability to build emotional narratives out of daring and vigorous imagistic constructions. Joining the dynamism of her dramaturgy, the fascinating imagery and also her bold creativity, Renata’s movies are taking one step ahead on the universality of visual language. KING CAR is one of her far-ranging goals to rear a movie that dialogues with elements of science fiction, action, and thriller. In 2017 Renata, together with Sergio Oliveira, released AÇÚCAR in the IFFR 2018. Her first feature, LOVE, PLASTIC AND NOISE (2013), debuted in Brasília Film Fest in which it won three awards. The film was also exhibited in Indie Lisboa and Abraffty Fest in Canada, where it earned the best movie, best directing, best actress and coadjutant. WALT DISNEY SQUARE won more than 50 awards all over the world. SUPERBARROCO, her first film, debuted at Cannes Film Festival - Director’s Fortnight, 2009. Renata is also a distinguished Production Designer. Her latest work was for Lucrecia Martel’s ZAMA, in which she won many awards like Fenix and Platino. She lives and works in Recife, Brazil.
Sergio Oliveira is a Brazilian screenwriter, director and producer.  His career in short films, like WALT DISNEY SQUARE, I DO TO MYSELF WHATEVER I WANT, and SCHENBERGUIANAS, was very acclaimed in festivals throughout Brazil and abroad. His first feature film, the documentary WANDERERS, won the Best Movie at the Semana dos Realizadores, RJ, Brazil 2011. In 2016, his documentary THE DESERT OF SOARA won Best Direction and Best Photography at the 18th Rio Film Festival. Together, with Renata Pinheiro, co-directed Sugar which won the Critics Award at the Fest In Lisboa, Portugal, in 2011. Recently, he won BEST SCREENPLAY at Raindance Festival 2021, London, UK with the feature KING CAR.