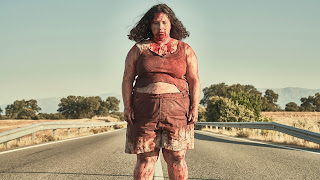 Josh is writer, filmmaker and Dread Central’s managing editor. He also hosts ‘Development Hell’ on the DREAD Podcast Network where he unearths unmade horror films. Josh was kind enough to sit down with me and chat about the Sundance film PIGGY. We also talk about DEAD END, HELLRAISER, FRIDAY THE 13th, HALLOWEEN, LEPRECHAUN, horror in space and the delightful genre trash we both love.

I had a great time chatting with Josh and hope to speak with him again. See the synopsis for PIGGY below:

With the summer sun beating down on her rural Spanish town, Sara hides away in her parent’s butcher shop. A teenager whose excess weight makes her the target of incessant bullying, she flees a clique of capricious girls who torment her at the town pool, only to stumble upon them being brutally kidnapped by a stranger, who drives off with them in his van. When the police begin asking questions, Sara keeps quiet. Intrigued by the stranger — an interest that’s mutual — she’s torn between revealing the truth and protecting the man who saved her.