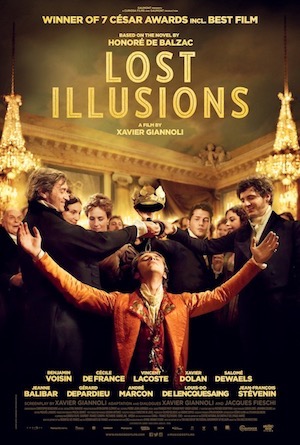 Giannoli’s deft, au courant adaptation of Honoré de Balzac’s sprawling novel of social-climbing and artistic compromise reminds us that the thorny entanglements of art, commerce, and media are centuries-old. This decadent, satirical romp that “plays with all the brio and jeopardy of a modern-day gangster movie” (Variety) is replete with both the opulence and grittiness of 19th-century Paris. Fake news and “pay for play” are familiarly pervasive, though sexier and funnier than today’s version -- and not a little soul-pricking, since the culprits are lefty journalists and a doe-eyed, underdog poet-protagonist (Benjamin Voisin). Our hero’s journey begins with a quest for love and pure art, then ascends steeply to heights of notoriety, fortune, and debauchery, and then… What goes up must come down.

Adapting Balzac’s novel for the screen had been a life-long passion project for writer-director Xavier Giannoli, whose seven other features, regularly selected for the Cannes and Venice Film Festivals, include César Award winners In the Beginning,The Singer, and Marguerite, his tragi-comedy about the socialite soprano modeled after Florence Foster Jenkins.