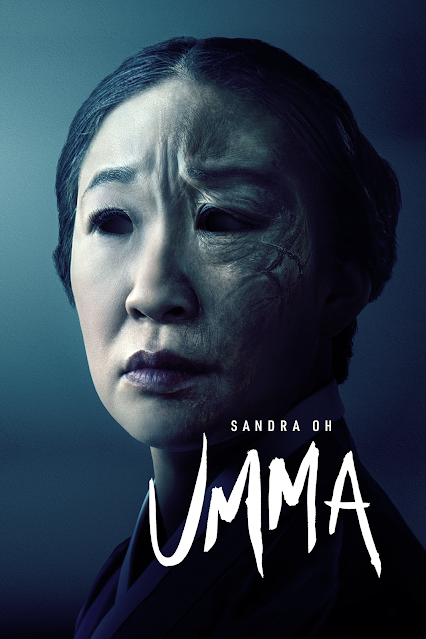 Sandra Oh has been consistently one of the most underutilized actors of the last 20+ years. I first became aware of her when she landed a recurring role on the HBO series ARLI$$, the show itself is (was) fine, not great, not bad, just a slightly above average half-hour comedy. That being said, Sandra Oh was always phenomenal on the show, she brought humanity to even the most absurd moments and delivered comedic relief when the air needed to be released from a scene.  The same can be said about her work on GREY'S ANATOMY, a long-running powerhouse that might not be my cup of tea, but her work as Dr. Christina Yang is undeniable.

UMMA (the Korean word for mother) is one of Oh's first forays into genre fare and the results are pretty remarkable.

The film is centered on a mother (Sandra Oh) and her daughter (Fivel Stewart) who have settled into a quiet life on a farm in the middle of America about 60 miles outside of nowhere. I was raised in a town called Winder Georgia, it's about as big as it sounds, and this place seemed rural to me. All is well on this serene (electricity-free) piece of land until mother comes to town.

Iris K. Shim is far more interested in the dramatic side of this supernatural tale than the jumps and scares. The film has moments towards the beginning that are truly haunting but as the film reveals itself we focus more and more on the character work.

I've always said that the measure of a great horror film isn't how scary it is but how much it makes you feel. You should be able to remove all the horrific elements and still have a story that's worth telling. Are you invested in the characters? When they find themselves in harm's way are you pulling for them? Or for the masked killer?

The fascinating thing about UMMA is that it feels like Shim gives up on the horror about halfway through and allows the film to dwell on the relationships. Sure there are some loud noises and creepy moments to keep this film classified as horror, but really this is a character piece.  A film more concerned with the impact of generational trauma than giving its audience the heebie jeebies.

This is a barebones disc with very little that would qualify as an "extra." Unless you consider subtitles supplemental material, bonus features are not the reason to pick this one up.

The 2.39:1 Anamorphic Widescreen presentation of UMMA looks incredible. I would have sworn this was a UHD transfer. The cinematographer Matt Flannery (THE RAID, GANGS OF LONDON, APOSTLE) has crafted some impressive imagery that makes this the kind of film you can use to test a television. To me, this is the reason to purchase this disc. Simply put, it looks great and the visuals support the narrative without ever calling attention to themselves.

To me, this is a must-own. I'll be revisiting this film and I want the best possible transfer for this one. I can watch certain films on VHS and not feel like I'm really missing out on anything. UMMA deserves to be watched in a room that is as dark as possible with the sound turned way up.

UMMA is currently available on Blu-ray, DVD, and digital.