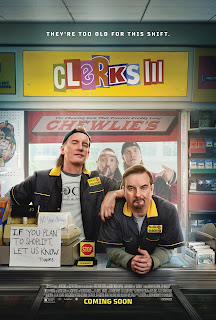 Following a massive heart attack, Randal enlists his friends and fellow clerks Dante, Elias, Jay, and Silent Bob to make a movie immortalizing his life at the convenience store that started it all.

Fingers crossed, this looks like it could be a return to form for writer/director Kevin Smith. Possibly more than any other filmmaker, I'm always pulling for Kevin's films to work. Even when his films don't fully connect with me, I can't detect an once of cynicism on screen. It seems like he really digs the stuff he makes and at the end of the day, good for him, the Kevin Smith filmography is the ultimate underdog story.