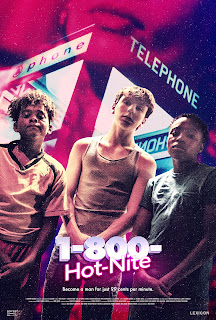 From the moment police break down Tommy’s (Young) door and arrest his father, his world is turned upside down. Faced with a parentless future, Tommy escapes child protective services’ custody with his best friends Steve (Bradford) and O’Neill (Machado) into the LA streets—packed with men trying to rob them, cops chasing them, a python, a fist fight, a first kiss and phone sex.  Throughout it all, Tommy keeps calling the 800 number, as he feels the woman on the line (Ali Richey) is the only adult he can confide in. By the end of the night, the boys’ brotherhood breaks down as they cross the threshold into adulthood.

The film had its world premiere at the Santa Barbara Film Festival in the Spring, and most recently claimed the Audience Award for Fusion Features at Dances with Films 25 in Hollywood.

“Nick’s distinct vision deftly captures the thin line between youth and adulthood,” said Quiver Distribution Co-Presidents Berry Meyerowitz and Jeff Sackman. “With an exceptional up-and-coming cast paired with a fresh, heartfelt script, this urban odyssey is sure to provide lessons, laughs, tears, and lays bare the often-awkward memories of one’s own adolescence.”