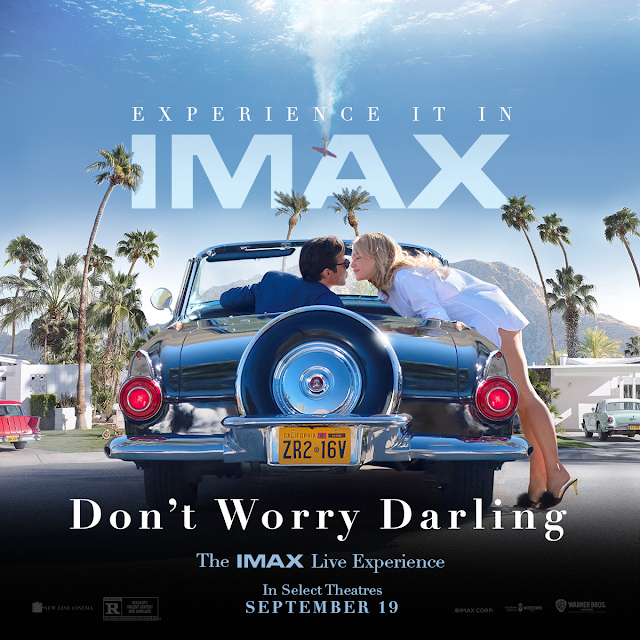 For a list of participating theaters and to purchase tickets please visit: http://tickets.imax.com/.

Alice (Florence Pugh) and Jack Chambers (Harry Styles) are lucky to be living in Victory, the experimental company town housing the men who work for the top-secret Victory Project and their families. Life is perfect, with every resident’s needs met by the company. All they ask in return is unquestioning commitment to the Victory cause. But when cracks in her idyllic life begin to appear, exposing flashes of something much more sinister lurking beneath the attractive façade, Alice can’t help questioning what they’re doing in Victory, and why. Just how much is Alice willing to lose to expose what’s really going on in paradise?
Don’t Worry Darling is directed by Olivia Wilde and produced by Wilde, Katie Silberman, Miri Yoon and Roy Lee. The screenplay is by Silberman, from a story by Carey Van Dyke & Shane Van Dyke and Silberman. The executive producers are Richard Brener, Celia Khong, Alex G. Scott, Catherine Hardwicke, Carey Van Dyke and Shane Van Dyke. A New Line Cinema presentation of a Vertigo Entertainment Production of an Olivia Wilde film, Don’t Worry Darling will be distributed worldwide by Warner Bros. Pictures and is set to open in theaters internationally beginning 21 September 2022 and in North America on September 23, 2022.
Don't Worry Darling Film News IMAX