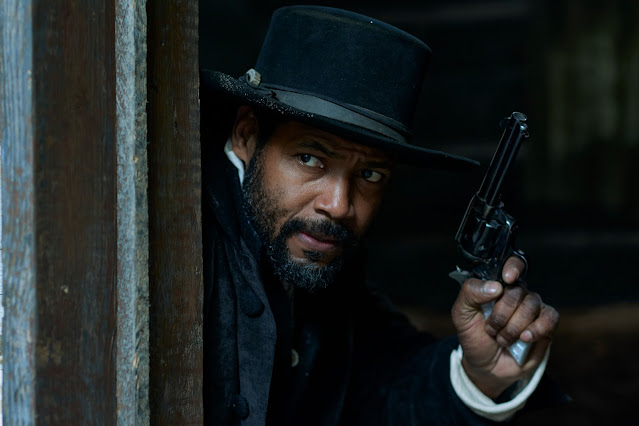 In the opening moments of MURDER AT YELLOWSTONE CITY, we are introduced to a picturesque but dusty town that appears to be past its prime. A city that was built on dreams of prosperity, dreams that were never fulfilled.

When a local prospector strikes gold a newfound sense of hope fills the community. Could they finally be turning the corner and making good on the promise that caused so many to head west? Well, no. The prospector is found dead and the local Sheriff is quick to blame a quiet newcomer.

But nothing is so simple in this sleepy western town, and more than a few of the locals have secrets to keep and reasons to kill. As the brutal murders continue, pitting neighbor against neighbor, Yellowstone City goes down a bloody path to a final showdown that not all will survive.

MURDER AT YELLOWSTONE CITY is a beautifully executed western. The scenery, set design, and costumes give John Garrett (the film's cinematographer) an incredible opportunity to capture some stunning visuals. Watch this on the biggest screen you can with all the lights off.

We are past the point of fully loaded DVD and Blu-rays being the standard. Wth that in mind, I was happy to dive into the commentary track and making-of featurette that are available on both the DVD and Blu-ray releases of the film. Director Richard Gray leads a conversation with the films cast on the commentary track that offers some insight and amusing anecdotes about the making of the film.

Should You Buy It

If you are a fan of character-driven westerns that are more concerned with the humanity of the narrative than the set pieces, I'd highly recommend giving this one a shot.

MURDER AT YELLOWSTONE CITY is currently available on Blu-ray and DVD.