The Movie Producer Taking the Homeless Crisis in America Head On 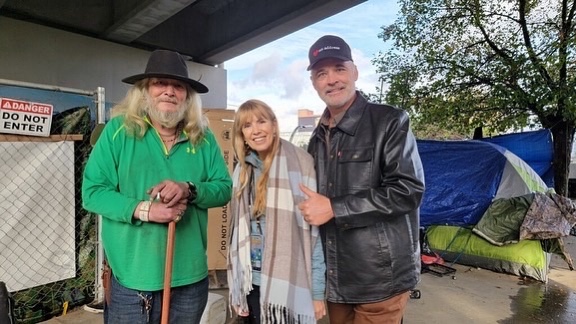 Taking on one city at a time, Robert Craig Films production team visited the homeless in 17 cities in America to understand their challenges and ultimately create an authentic documentary and feature film that will emotionally resonate with audiences.

The film, No Address, a scripted feature film that will begin production in February, will shed light on the human side of homelessness with beautiful and compelling storytelling. Robert Craig Films, a producer of award-winning purpose-driven movies, strives to effectively motivate viewers to engage deeper with compassion in the community around them and incite personal activation.

Taking a deep dive into raising awareness of the homeless crisis in America, the production team toured the following 17 cities by bus including Los Angeles, San Francisco, Sacramento, Portland, New York, New Jersey, Portland, Chicago, Texas, and Washington DC, visiting rescue missions and encampments to create a documentary titled Americans With No Address, that vividly portrays America’s leading crisis and the millions of people that suffer.

The team also interviewed the executive director of homeless policy for the Biden administration, the Mayor of Sacramento, the homeless director for the Newsom administration, the CEO of Citygate, several Salvation Army Majors, and directors of missions and transitional programs across America. The feature film No Address will follow from the documentary Americans With No Address, filmed on the bus tour. Casting for No Address has just begun, and the film will shoot in Sacramento.

“Both the documentary Americans With No Address and the feature film No Address aren't just about getting people emotionally invested so they take action, but also bringing solutions to the table. It was incredibly important to bring world-renowned homeless expert Robert G. Marbut Jr., Ph.D. on board and his work to foster the creation of holistically transformative environments to reduce homelessness,” says Craig.

Julia Verdin, No Address writer and director and Americans With No Address co-director, says, "Making the documentary and getting a sense of the world of people experiencing homelessness and their challenges was critical in fine-tuning the script. Robert Marbut’s and Philip Mangano’s input and years of experience also helped improve the script and keep it authentic.”