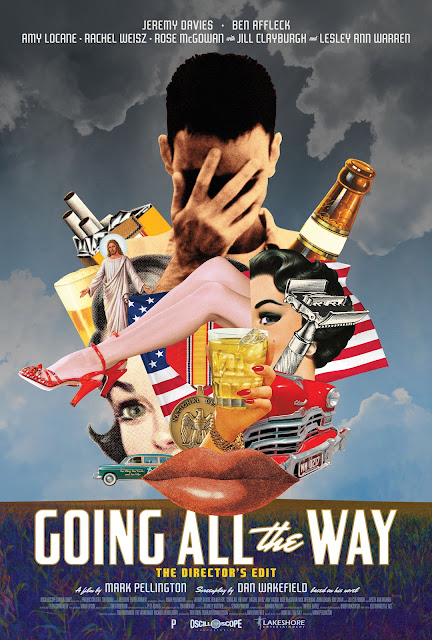 Oscilloscope Laboratories will present a never-before-seen 4K re-edit of Mark Pellington’s vibrant Sundance Film Festival hit GOING ALL THE WAY: The Director’s Edit. Originally released in 1997, Pellington’s debut feature film is based on Dan Wakefield’s best-selling novel about two young men facing an uncertain future in 1950s Indiana, after their return from the Korean War, and features breakthrough performances by then unknown actors Jeremy Davies, Ben Affleck, Rachel Weisz, Rose McGowan, and Nick Offerman who bolted into stardom.  The new cut was rescanned for 4K and features 50 new minutes of never-before seen footage, a new title sequence created by Sergio Pinheiro along with 50 new minutes of music from composer Pete Adams.  Oscilloscope Laboratories is giving the film an exclusive theatrical run and will open in New York at the Quad Cinema on Friday, December 16th with rollout to select cities.

Mark Pellington's adaptation of Dan Wakefield's seminal novel about a young man coming of age in the 1950s is a timeless story of freedom and repression, friendship and family, sex and love, and the psychological and spiritual struggle to be true to one’s self even if it means going against society’s expectations. In his debut as a feature filmmaker, Pellington constructs an elegant and morally complex tale about two young high school alumni and Korean war veterans returning to their sheltered Indianapolis community, only to find they no longer fit in. As class­mates, shy, artistic Sonny (distinctly portrayed by Jeremy Davies) and charming, popular Gunner (Ben Affleck in his first lead role) had nothing to do with one another, but now, in the stifling climate of Eisenhower America, where prejudice and paranoia rule the day, the two young men find in each other the strength to change their lives and futures. Each must choose between the suffocating, but familiar comforts offered to them by their mothers (Jill Clayburgh, Lesley Ann Warren) and their old flames and friends (Amy Locane, Nick Offerman), or the exciting, but uncertain futures represented by a pair of enthralling new romantic prospects (Rachel Weisz, Rose McGowan). Theirs is an emotionally fraught journey—especially for Sonny, who struggles with self-doubt and thoughts of suicide—but one leavened by moments of humor, uplift, and self-discovery. Originally released in 1997, the newly re-edited and restored version completely upends the original cut, hews closer to the source novel, and cements the film as one of the most aesthetically fresh and thematically fascinating films of the 90s, as well as a testament to the ever-evolving possibilities of cinematic rediscovery.