THE DAMNED: DON'T YOU WISH THAT WE WERE DEAD gets a home video release date 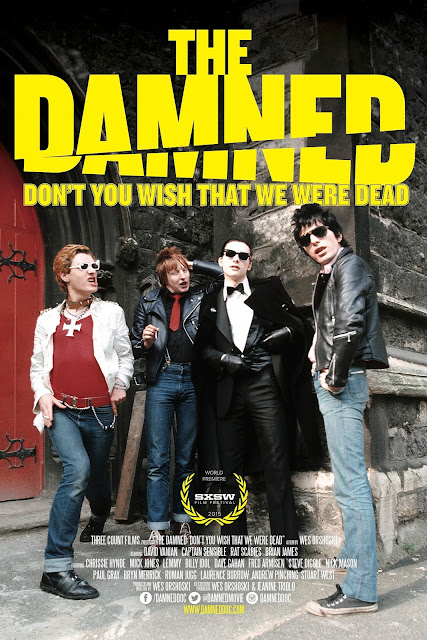 After packing cinemas and collecting rave reviews around the world, THE DAMNED: Don't You Wish That We Were Dead is coming to home video on May 20th.
Hailed as "excellent" by Uncut, "fascinating" by The Arts Desk,and "funny, fast-moving and gloriously chaotic" by The Hollywood Reporter, the film was directed/produced by Wes Orshoski, and is the first fully authorized documentary on punk pioneers The Damned.
Ireland's Hot Press raves: "Orshoski came onto our radar with the acclaimed Lemmy documentary in 2011 [which he co-directed/produced] and has once again created a tour de force, presenting an entertaining and searingly honest depiction of the grievously overlooked punk legends."
Filmed around the globe over three years, and world-premiered at SXSW 2015, THE DAMNED: Don't You Wish That We Were Dead tells the story of the third prong in the holy trinity of U.K. punk. In advance of both the Sex Pistols and the Clash, The Damned was the first U.K. punk band to release a single (1976's immortal "New Rose"), the first to release an album ('77's frenetic Damned Damned Damned), and the first to tour America (planting their flag at CBGB in April 1977). Now in their 39th year, The Damned are the only band from London's 1976 Punk Rock Big Bang still touring the world today. 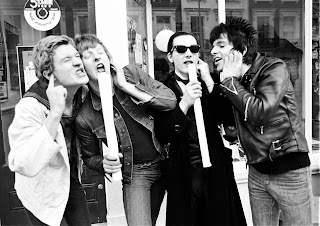 Taking its name from the title-track of the Damned's 1979 album, Machine Gun Etiquette, the film charts the band's unique history, bitter infighting and legendary bad behavior (drummer Scabies is blamed for creating punk's "gobbing," or spitting, phenomenon); it takes viewers into the toilets once scrubbed by Captain Sensible and viewers follow the Damned on their world-wide 35th anniversary tour in 2011 -- with estranged band founders Scabies and James seen on screen answering that trek with a snarling celebration of their own. In a bizarre twist of fate, other former members find themselves being treated for the same form of cancer by the same doctor in the same Welsh cancer ward; elsewhere, the band's founding members are seen grappling with their legacy, and the fallout from missed and/or bungled business decisions that have kept them painfully working class for most of the past four decades.

The Arts Desk: "Where many music documentaries have a similar dynamic arc-rise, fall, rise again-Don't You Wish That We Were Dead is a fascinating, rambling saga that emanates a rich, sometimes morose, sense of what it's really like to have a whole life defined by the oh-so-brief explosion that was punk rock."

In the bonus features, Captain Sensible takes viewers on a tour of Croydon, the south London town that gave rise to the Damned, and he busks on the streets of Hollywood with actor/musician/comedian Fred Armisen, a huge Damned fan. Elsewhere, the full story of the band's involvement and eventual ousting from the Sex Pistols' fabled Anarchy in the U.K. tour of 1976 is told in detail for the first time.

In the film, The Damned is credited with helping to ignite the punk scene in America. In 1977, the Damned were the first of the U.K. punks to play in both New York (at CBGB) and Los Angeles (at the Starwood).

In 2010, The Huffington Post's Binky Phillips recalled the band's U.S. debut at CBGB in early April 1977: "I was down at CBGB with a chip on my shoulder. My town was Punk Ground Zero.... I was, in fact, without a struggle, reduced to fan boy within 30 seconds. It was as if the entire evening proceeding them had been in black and white and suddenly we were thrust into Technicolor Oz."

The band officially kicks off its 40th anniversary tour on May 20 with a sold-out gig at The Royal Albert Hall in London.