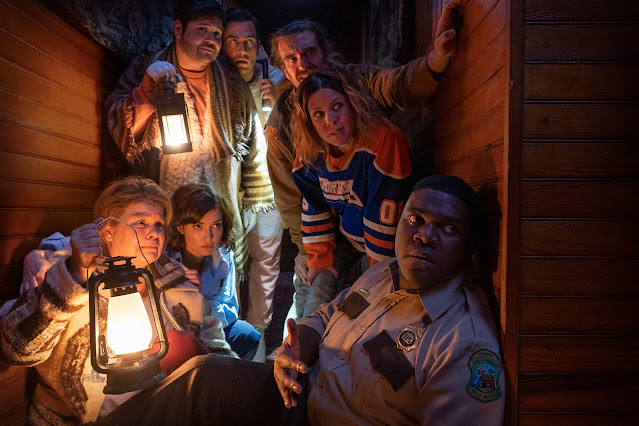 It is incredibly difficult to get one thing right when you are making a film be it a horror, comedy, or mystery. To get all of those right and execute a horror/comedy/mystery that delivers on all fronts is a Herculean task and should only be attempted by someone with a clear vision and a complete lack of risk aversion. WEREWOLVES WITHIN is a screwball comedy with enough horror to satisfy the Fango crowd and a whodunit mystery that in no way feels tacked on or arbitrary. Forest ranger Finn Wheeler (Sam Richardson) is having a tough time with his girlfriend and sees his new assignment to Beaverfield as the perfect way to be less available. He is introduced to the residents of this small mountain community through the local mail carrier Cecily Moore (Milana Vayntrub). To say the townsfolk are eccentric would be understating it. After a blizzard takes out the town's power the unconventional locals and our hero take refuge in the lodge. Strange and disturbing occurrences reveal someone has nefarious intentions and what seemed like a reaction to the storm was part of a more sinister plan. The real magic trick of how these competing thematic and genre elements click is in the casting. There are over the top performances sprinkled throughout the film but Sam and Milana ground everything just enough for the audience to be emotionally invested in their story. They have on screen chemistry that is nothing short of charming. Josh Ruben has pulled off something really special with WEREWOLVES WITHIN. The film is heightened from all aspects. The performances, editing, sound design, and look are all given moments to shine and carry the narrative but they never take over completely. This balancing act in lesser hands would be sheer chaos but Ruben manages to focus on almost every moment with precision and thoughtfulness. This level of execution is not often seen in straight films let alone goofy nonsense (and I mean “goofy” as praise) like this. Even if a moment doesn’t completely land it feels like everything we are witnessing was intentional. WEREWOLVES WITHIN is currently available on Blu-ray and DVD. The release is pretty bare bones but that’s ok. While I would have loved the opportunity to listen to a commentary track or check out any behind the scenes footage that might be laying around, I’m just happy this one gets to sit on my shelf. I know this will be a film that I revisit for years to come. This will be the kind of film that I will love to introduce to people. Now I just need to figure out if it will be a double feature with CLUE or AMERICAN WEREWOLF IN LONDON.