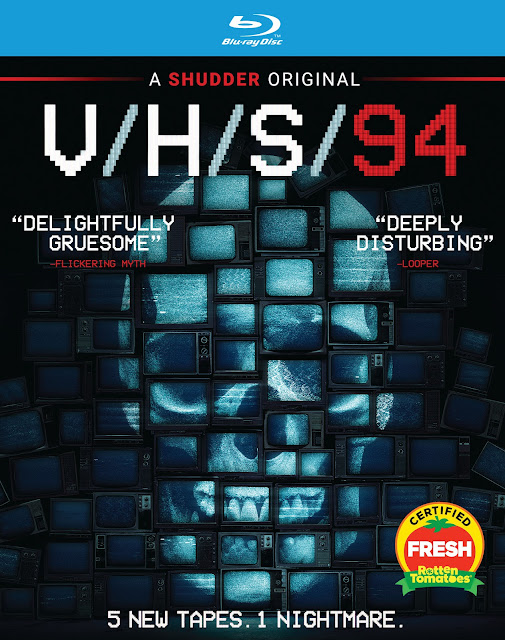 Written and directed by an ensemble filmmaking team including: Jennifer Reeder (Knives and Skin), Chloe Okuno (Slut), Simon Barrett (The Guest), Timo Tjahjanto (Impetigore), Ryan Prows (Lowlife), Steven Kostanski (PG: Psycho Goreman)
Produced by: Josh Goldbloom, Brad Miska and Kurtis Harder (Spiral),
Executive Produced by: David Bruckner (The Night House) and Radio Silence (SCREAM, Ready or Not)
Starring: Anna Hopkins (“The Expanse”), Christian Lloyd (“American Gods”), Kyal Legend (“Backstage”) and Budi Ross.
The Film(s)
In V/H/S/94, after the discovery of a mysterious VHS tape, a brutish police swat team launches a high-intensity raid on a remote warehouse, only to discover a sinister cult compound whose collection of pre-recorded material uncovers a nightmarish conspiracy.
Holy Hell - Directed by Jennifer Reeder
A story about dirty cops getting what they deserve. A satisfying wraparound that ties all the films together and gives the piece an overall sense of thematic symmetry.
Terror - Directed by Ryan Prows 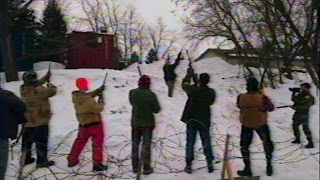 This is a film that has a great idea and needs to be expanded. The TERROR is centered on a far-right militia who are planning and preparing for an act of terrorism. The use of sound and repetitive explosions (both literal and figurative) give this short an ill-at-ease tension that could easily be expanded on. In theory, I have no interest in spending more time with these characters, but I do feel like there is more room to explore the satirical elements that were merely hinted at in this telling.
The Empty Wake - Directed by Simon Barrett
It's no surprise that the man responsible for YOU'RE NEXT and THE GUEST managed to turn in the film's most confident and atmospheric short. This is Barrett's 3rd entry in the V/H/S franchise and with that experience comes the ability to play with and subvert your expectations. THE EMPTY WAKE is a gut punch that will leave you sore for days.
The Subject - Directed by Timo Tjahjanto 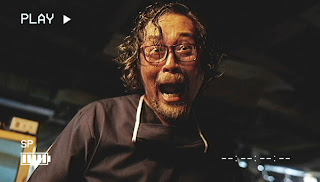 As focused on action as horror, The Subject is a play on the mad-scientist trope, this one hits the ground running and never lets up. This type of story has been a part of the genre for as long as there has been movies and for good reason. It gives an excuse for the body horror found in everything from FRANKENSTEIN to THE FLY... and loads of other films that don't start with "F", those were just the first two that came to mind.
Storm Drain - Directed by Chloe Okuno
This is hands down my favorite of the bunch. Chole Okuno managed to capture the feeling of '90s trash journalism and layer that over a wonderfully innovative sewer monster tale. At this point, is it fair to say that the "sewer monster" is a horror sub-genre? Either way, Storm Drain stands up and next to Alligator, CHUD, Mimic, and any of the many horrors from beneath the streets films.
Overall this is the most successful film in the V/H/S franchise to date. These films are designed to feel like something taboo you shouldn't be watching. A series of simulated snuff flicks that have yet to really leave a lasting impression, until '94. I've enjoyed at least one segment in each of the entries but this is the most cohesive or complete in the series. The pieces feel connected and inform each other in both direct and thematic ways. Most anthology horror suffers from the same ailment, a lack of connective tissue. They feel like disparate stories loosely tied (more often thrown) together with little regard for how they feel next to one another. A great anthology should feel more like an album than a mixtape. While V/H/S 94 is a nasty, vile, and aggressively shocking tome about voyeurism it's also competently made by creators with more on their mind than cheap scares.
Rating ★★★★☆
The Extras
Bonus features on the DVD and Blu-ray include:
Behind-the-Scenes of V/H/S/94
San Diego Comic-Con Panel Interview
Commentary with Filmmakers and Producers, Hosted by The Boo Crew
“The Empty Wake” Commentary with Simon Barrett
Deleted & Extended Scenes
V/H/S/94 Special FX with Patrick Magee
“The Empty Wake” Visual FX
Full-Length Veggie Masher Commercial
Behind-the-Scenes Images
HAIL RAATMA!
Rating ★★★★★
Overall
When I was 15 years old, I went with some friends to a theatre about 30 minutes from our small suburban home in Hockessin Delaware. We took this journey to see Faces of Death IV (I think) on the big screen. We all knew the death on screen was fake but we sat around after the film discussing which of the sequences were the most convincing. I barely remember any of the film, but I do remember they gave us a certificate for not leaving during the showing. I never felt like I earned that one, but I feel like deserve one now for making it through V/H/S 94. I respect the hell out of this film, but it is by no means a breezy watch. This is a rough one, not for the faint of heart.
Overall Rating ★★★★☆
Available on VOD, Digital HD, DVD and Blu-ray April 19, 2022