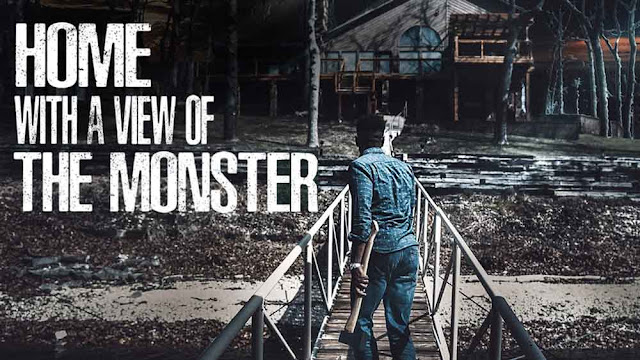 2019
Directed by: Alex Greenlee and Todd Greenlee
Written by: Alex Greenlee and Todd Greenlee
Stars: Ellen Humphries, Sebastien Charmant, Danielle Evon Ploeger, Jasper Hammer
To me, the best horror films are ones where the scares are secondary. Films where you could excise all the guts, gore, and mayhem and still be left with a film. A story that stands on its own without leaning on jump scares to placate the audience. One of the more impactful moments in HOME WITH A VIEW OF THE MONSTER  is when a character confronts someone about babyproofing a house, that's it, not a beheading or a cat jumping out of a closet, but a moment that introduces an idea, an idea that informs not only the character who is being observed but the character who is doing the observing as well.
I won't go into the exact details of the film because one of the sheer joys of Alex and Todd Greenlee's feature-length debut is discovering how each chapter of the film informs what you've already seen. While the film is told out of sequence, much like a well-crafted novel, the order in which the author feeds the audience information is critical to its success.
To keep things vague, the film is about a young married couple, Rita (Ellen Humphries) and Dennis (Sebastien Charmant), who are struggling with their relationship. We meet them on a camping trip where it is abundantly clear the two are trying to connect but can't seem to get the timing right. They are renting out their home while they are out of town and decide to return home from their trip a day early. That's when the film truly starts to reveal itself. We've had hints of issues our couple might be facing but when they find their home seemingly abandoned by the renters, the world we've been introduced to quickly begins to unravel.
Each "chapter" of the film introduces new details about our young married couple and the couple who rented it from them, Kate (Danielle Evon Ploeger) and Chance (Jasper Hammer).
While the plot mechanics on display in HOME WITH A VIEW OF THE MONSTER are impressive they wouldn't mean anything without the right casting. The film is essentially a four-hander that jumps back and forth between the two couples.
Danielle is given the broadest character with Kate. She is immediately unlikeable and the kind of character that makes me thankful I'm too old to have met anyone on a dating app. I was married by my early 30s and back then the only thing I could do on my cell phone was text with T9 and make calls. Kate is an asshole, she litters, steals, treats people like shit, treats animals worse, and is clearly suffering. Danielle manages to make a terribly unlikeable character engaging and ultimately sympathetic. She wears her flaws on her manic sleeves and delivers a performance that is both over the top and subtle. She puts on a fucking clinic.
Chance is the character we immediately sympathize with, if for no other reason, after all, he is stuck with Kate. But as we soon discover, he's not without his flaws. Jasper plays this layered character with a quiet desperation that hints at a darker past. A history that led him to this disturbing weekend getaway. As a father of two, Jasper captures my worst fears and turns them into an honest and fully realized portrayal of a man grappling with addiction.
Rita introduces us to the weirdness we are about to see early in the film but often plays the voice of reason. Because we have seen her hallucinate in the opening scenes, we can't really trust our anchor, but in this film, it's what we got. Ellen Humphries pulls off an impressive if not a showy task with her Rita.  She takes what could have been a thankless straight-man and injects just the right amount of humanity to give this film a soul.
Dennis is a romantic. In other words, impulsive and follows his heart without much thought. He is an optimist but his impulsiveness makes him quick to anger. His quick decisions create unwelcome ripples for years and perhaps generations. Sebastien somehow makes a man who loads a gun in his sleep the heart of this film. He is the person who keeps making bad choices but we know his heart is in the right place, even if his head is up his own ass.
From an acting perspective, HOME WITH A VIEW OF THE MONSTER is the cinematic equivalent of seeing an 80's metal band in concert. All the actors are given a chance to take the spotlight and solo for a minute or two. But unlike a MOTLEY CRUE show the solos in HOME WITH A VIEW OF THE MONSTER service the story not the egos of the performers.
The editing, ill-at-ease score, and beautiful setting make this an engaging watch, but the performances are what make this a much watch. I honestly feel like every cut, sound cue, and shot composition is trying to tell us more about the characters and support the performers. I never felt like the Greenlees were trying to impress us with their directing prowess instead they were trying to tell this story in an economic and impactful way. I have had this film stuck in the back of my head for days now, not because of what it had to say about the darkness in humanity, but because of what it had to say about the light in all of us.
HOME WITH A VIEW OF THE MONSTER is available on Shudder and Amazon Prime.